One clear night, approximately 10-15 years ago, a group of fun-loving, free-wheeling, frisbee-throwing gals were sitting around a campfire when they looked up at the sky and saw a beautiful ~eclipse~. This group of gal pals realized that the moon blocking the sun (and frisbee being fun) was similar to the moment of ecstasy when the disc they threw around every day passed in front of the sun, momentarily resembling an eclipse. Blinded by the glory of the sport, these gals realized that, although the moment the frisbee eclipsed the sun rendered the frisbee invisible, their inner love of the game provided them with the vision they needed to catch the frisbee with outstretched arms. This moment of temporary blindness, simultaneous bliss, and ultimate knowing heeded the inception of Carleton College Eclipse.

From then on, this program experienced an illustrious rise to greatness, gaining power from our love of frisbee, the power of friendship, and the guidance of the heavenly bodies: the big frisbee of the sky, and the smaller frisbee of the heart. While many tournaments have been won and lost, Eclipse still considers the greatest trophy to be the friendships they make and the fun they have along the way. 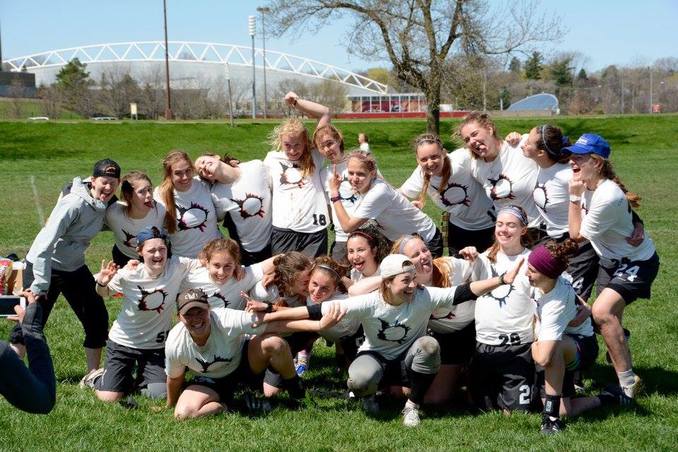 Eclipse formed roughly fifteen years ago as a team devoted to having fun and playing frisbee. The team has grown from just a group of girls who like to dance, have fun, and play Frisbee, to a group of women who like to dance, have fun, play Frisbee and WIN! Breaking out of their B-team label, Eclipse started to make cuts seven years ago and in 2011 went to DIII nationals for the first time, only to come away victorious with a national championship title. The team has made DIII nationals every year since then, most recently winning back-to-back national titles in 2016 and 2017! While the success is both amazing and novel for these women, the team has not lost sight of its founding priorities: growth, love, and spirit. Eclipse continues to be an environment where women can develop their skills, play competitively, and enjoy Frisbee. ​
2012 Eclipse for Five Ultimate Sponsorship
Powered by